One of the very basic elements in designing a cylinder to meet the needs of a machine is the determination of whether or not the cylinder should be a single or double rod cylinder.  Each type has its own distinct advantages and disadvantages, and is an important early step in the cylinder design. 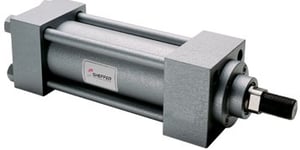 Some of the downfalls to double rod cylinders can be increased cost due to the extra rod length, seals and gland, and extra space needed for the additional rod coming out of the cylinder. It also should be noted that some mounts are unavailable for a double rod cylinder, such as a clevis, pivot and rear flange mount.