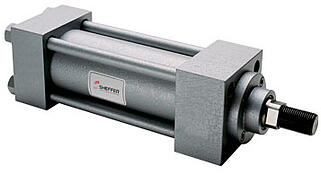 There was a time, almost a generation ago, when the HH range of cylinders used an array of (normally) four metallic rings as the piston seal. Their function was much along the lines of the ones used in a car engine to this day.

These rings were inert to more or less anything the world threw at them. Heat was an easy task, aggressive fluids no problem and the working surface was so hard that the tube was more likely to wear over time than the seals were to lose their size.

Well, the rings certainly got extraordinarily expensive. Beside which, things could also go wrong if one of the rings snapped; in no time at all, great big score lines would appeared in the tube.

There was also no room in the length of the piston for any useful bearing area, so any side load on the customer end of the piston rod resulted in the rod bush acting as a pivot point and super pressure points being developed between the tube and the lands between the piston rings.

Then along came the development and commercial use of coaxial seals of various sorts; together with a range of PTFE bearing strips loaded with ‘fillers’. These bearings do a super job of taking load while maintaining a dissimilar material interface with the tube – so the piston is protected and tubes have a long and happy life.

What’s wrong with that?

Well… nothing is wrong. Unlike a ring fitted piston – fluid ‘by-pass’ is down to zilch and at least to a reasonable extent, side-loads could be absorbed. So if anything was to wear out, it would be the wear strip(s) which are considerably cheaper to replace than a tube!

Why does the word ‘virtually’ creep in?

One or more further design features could potentially be added to the current coaxial piston seal design and for one particular reason, which only makes itself a nuisance in one in about ten thousand applications.

Take a small bore, short stroke cylinder and stick it in a fairly remote location to the valve, which is controlling its motion. Now make the piston oscillate back and forth at high speed to do some useful work.

What happens to the fluid in the pipes is that it gets hot. Often too hot to be good for the fluid itself and possibly too hot also for the cylinder seals – which no doubt were selected for an ambient and reservoir temperature that was intended, and probably will still be, much more reasonable.

Why this is happening is all down to some simple facts of math and physics. Long pipes mean the same ‘slug’ of fluid is shuttling back and forth and gaining heat from all the twists and turns it is being subjected to (download our whitepaper 12 Fluid Power Engineering Charts and Guides for Everyday Use for some more simple math and physics).

What are the solutions available to the Design Engineer?

It can be a fine balancing act to get the ‘bleed’ just right and some experimenting might need to be done to obtain perfection – but the advantages can be enormous; with lower temperatures leading to longer cylinder and fluid life.

Can you think of any other solutions available to the Design Engineer in this case? Leave a comment with your thoughts below.