We all know the name Steve Jobs very well. Jobs was fired from his own company in 1985. Jobs easily could have felt sorry for himself, felt defeated, and played victim after being fired. He chose otherwise. After he was fired, he saw the problem or crisis and took authority over the situation, seeing opportunity where others doubted. He went on to start a small animation company and turned it into the giant that is now Pixar. Once The Walt Disney Company bought Pixar out in 2006, Steve Jobs became the largest shareholder in Disney. Point being unwanted change happens; look beyond it and embrace the discomfort it brings. Every Problem presents an Opportunity.

It is all about the mindset and actions you take following the problem. You can dwell and make the said problem presented a bigger issue than it was to begin with or you can choose to find the opportunity to learn, change, and ultimately grow. 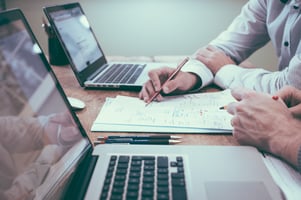 Here are three short points I find useful whenpresented with a problem:

One thing I have witnessed and seen first hand is companies’ that choose to complain and slowly address the issue end up losing customers and slowly dying. If you're not adapting as a company and changing, you're dying. You grow with the times or you die. Know when to take the risks. Playing it safe can only take you so far as a Company. Pushing yourself to take risks and adapt to change will benefit you and eventually your company to meet the next challenge ahead. Always have the mindset to grow because the day you become content you start to quickly weaken.

Hate to break it to you but you're not the only one that has something useful to offer. Choose to listen to what your Employees and Co-workers have to say. You never know who has the idea or action point that changes the problem into a huge opportunity. The grand idea your company needs may not be right in front of you so make sure you listen closely to your colleagues and you just might find that opportunity you have been looking for. Never shut down anyone’s ideas, you do not want to discourage future ideas and solutions they have from being presented.

My Great Grandfather Ralph J. Stolle always said "I never made a mistake, I just learned a lot of lessons." His point being the way you should view a mistake is to learn, adapt and make sure you progress from there. Problems only become major if you ignore them. Don’t call it quits when you’re confronted with an issue. Ask yourself what you can do to turn the problem into an opportunity. Here at Sheffer we pride ourselves on doing the right thing at all times no matter the sacrifice. We always do our best to make it right and ultimately make our end customers happy and satisfied. When failure presents itself we acknowledge and learn from the mistake and encourage the entire company to not see the problem as a dead end but as the opportunity or beginning of overall growth. Our CEO, Jeff Norris says it best "To make a mistake and learn from it is it okay. To repeat the same mistake is a Sin."

What are your thoughts? How does your company overcome Problems and turn them into Opportunities?