Any piece of equipment operates best when it is used regularly within normal guidelines.

Take for example a classic car; it ran perfectly when you put it away last fall, but something happened during the long winter.

You go to start it up in the spring for a spin around town, you’ve kept the battery trickle-charged and it spins right over.  You take off only to find that one of the brakes are leaking fluid, or maybe one of the seals in the engine is now dripping oil on the driveway.  Your cruise just turned into a retrospect of why you keep an old car around that you seem to just work on all the time.

How does this scenario apply to something seemingly as simple as a hydraulic cylinder?  Hydraulic cylinders have no power source to run down, nor do they have parts that spin thousands of rpms.  They just sit there quietly and apply their great mechanical forces doing countless tasks as varied as the applications they are put in to.

So they just sit there. Whether they’re used or not... or do they?

Let’s look a little deeper shall we?

Each time a cylinder is cycled, several things happen: The minor debris on the rod gets wiped off by the wiper as the rod is retracted, and a fresh film of fluid is applied to the surface.

But wait:  My cylinder rod is dry, otherwise it would already be leaking. Right? 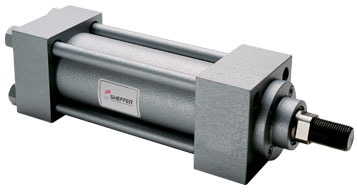 One of the desirable qualities of modern rod packings when applied properly in a cylinder, is an ability to hold pressurized fluid inside the cylinder while at the same time allowing a microscopically thin film to remain on the surface. This is made possible also due to the surface finish of the rod.  While it looks smooth as glass, in fact it is specified to have a minimum surface finish.  The microscopic peaks and valleys allow that little film of fluid to be renewed each time the cylinder strokes.  In fact, you might think you have the beginnings of a leak (or seepage of fluid), due to a very small amount of wetness that is seen right at the lip of the wiper.  In all but the strictest applications, everything is just fine.

Oil pooling is more pronounced in certain applications (usually vertical with rod up), and in an indoor environment where the smallest single drop of fluid on the floor is treated as a major event.

Other important things that happen

Another thing that happens when the cylinder is cycled, is that the flexible elastomeric elements in the seals are exercised.  This keeps them pliable so they can conform to the surfaces and do their job.  In the earlier example of the classic car, the engine, transmission, and brake seals that start leaking after not being used had taken a ‘set’, and when asked to flex to conform to the surfaces they needed to seal, they are no longer able to do so. Especially in the case of brakes, the fluid used is prone to attract water (hygroscopic), which combined with the inevitable air that tends to get past the seals, causes a chemical degradation of the fluid.  The fluid can become acidic, and attack the surface of the metals used in the mating parts, which causes corrosion.  The first time this corroded area goes underneath the seals, major damage occurs to the sealing lips on a microscopic level.

So, specifically addressing the subject of the article.  What can be done if cylinders must be stored for long periods of time?  Well, since we now know how cylinder sealing systems work, we can address what can happen during storage and hopefully prevent it!

Now that we're in the know

1. Protect the cylinder components from external corrosion.  Use substances compatible with the materials of the cylinder, especially the exposed wiper.

2. Insure the cylinders are full of hydraulic fluid and fully bled of any air at either end. Especially if using other than mineral based fluid, ensure that the fluid being used has sufficient anti-corrosion properties to adequately protect the cylinders beyond the amount of time they are being stored.

3. Keep them out of the sun: The fluid heats up and expands, causing internal pressure that could exceed the working pressure and cause seal failure. Even if the pressures don’t build up to damaging levels, the subsequent cool down causes contraction that can cause a vacuum and pull moisture-laden air into the cylinder, which can cause fluid contamination and eventual corrosion.  Certain elastomeric materials can also be degraded by UV light from the sun and can lose some of their flexibility.

Fluid expansion can also happen during cylinder operation, and there has been a least one documented account of and overhead crane failing due to sunlight induced fluid expansion.  The cylinders were effectively capped by the hydraulic system with no provision to relieve any overpressures on created due to expansion.  The pressure relief valves were on the other side of the system check valving that held the fluid in the cylindersAfter a long extended weekend in the sun, the fluid heated up and expanded, causing an overpressure situation.  When the seals failed, so did the crane.

4. Be aware of 'sagging' effects on the seals. Another one that would not have been so obvious before we knew how they work...

Especially a concern of very heavy cylinders stored in a position other than vertical, that remain in the same position for an extended period of time, sagging of the rod and piston assembly may cause the seals to take a 'set'.  All elastomeric materials have a 'creep' property that allows them to relax when under a constant load after a period of time.  If this happens, it may be remedied by cycling the cylinder a few times, but keep in mind they may never return to 100% elasticity.

If vertical storage is not possible, then it is recommended to rotate the cylinders periodically at 90 degree increments to help avoid this condition.

Have you been faced with any other challenges when dealing with long term storage of cylinders outdoors?  What other considerations might you add to this list?