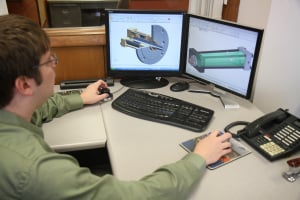 It doesn’t matter where you come from, or what you call them, the arrangement of components, which hopefully bring a cylinder to a graceful stop at the end of its stroke is a useful bit of kit – provided it works right first time and every time!

Sheffer calls them cushions – but it’s surprising what names other people have developed for exactly the same thing. The range of names may well be cultural or more likely regional; whatever the reason, if somebody mentions a gag, or a choke, or any other word of a similar nature, it’s probably worth asking if they are talking about a cushion.

The cushions Sheffer uses in NFPA ranges of cylinders were designed to do the job while fitting into a defined envelope. By the time a rod bearing has been fitted into the Head, there is not much space left for other things - and a rod bearing is an essential you can’t leave out of a cylinder design. Likewise, a Cap is not blessed with excess material; so again the length of a cushion must be limited.

Ask a cylinder maker and no doubt they will say that a cushion is there to simply arrest the impetus of the piston and rod assembly. Fortunately, there is normally enough capacity in a cushion to dissipate quite a bit more kinetic energy. So, the customer who connects the rod to a mechanism which is not too heavy and traverses the stroke at reasonable velocity will probably find that a few tweaks of the cushion adjuster screw arrives at just what the Engineer ordered and the design can join the other 98% of other installations which work like a well oiled machine.

The problem the remaining 2% of installations encounter will almost certainly center on either or both of the twin evils - Mass and Velocity.

Taking the limited cushion length available as one parameter; we then have to consider another aspect of the any cylinder design and that is the wall thickness of the tube. This means limiting the peak pressure of the fluid trapped in the cushion to a value which is within the safe working limits of the tube wall thickness for that particular range of cylinders.

In the past applications where large loads moving at high speed saw people needing ear defenders for the time the piston hit the end of stroke and deft fingers to retrieve the parts left over when the piston and rod became separated. Typically; a cylinder pushing a well loaded, wheeled trolley, along a track at about Mach 2 required a 7” long cushion piston to safely absorb the kinetic energy developed during the operation!

There is always a drive for greater production speed but guys – assuming you are working below the speed of light - ½ m v2* is always going to prevail. So if you are having trouble with a big clunk at the end of a stroke and the cushion adjuster is screwed all the way in – then it’s time to talk.

Don’t despair, fixes include; longer cushions, tailored profile cushions, improving the traverse profile and slowing the load prior to entering the cushion – as well as the option to build a linear decelerator into the mechanism for the really super-size load moving at full tilt!

What possibilities do you see here? Leave a comment with your thoughts below.